The conception of the wall began as early as 2020.[2] The assumption that no Kaiju would attack a wall bordering the coastline was the primary rationale behind supporting the wall over the Jaeger Program. The belief that the Jaeger Program would benefit the world in the long run was thought to be a hypothesis without a strong basis. The project and wall itself was dubbed the "Wall of Life Program".

Unwilling to put stock in the Jaeger Program any longer, the United Nations cut finances to the program in late 2024 and began focusing their efforts on constructing the wall so that it would be strong enough to prevent the Kaiju from reaching the rest of the world beyond the Pacific Rim.

After the death of his brother Yancy, Raleigh Becket quit the PPDC and was later hired to work on the construction of the Alaskan wall.[7][6]

Working environments around the wall were dismal, with work at the uppermost part of the wall being the most dangerous. Limited resources provided by rations were of little or no benefit to those who worked on the wall.

The wall was proven a complete failure when the Category IV Kaiju Mutavore easily breached the section of the Australian wall built around Sydney, putting the city at risk of being ravaged by a Kaiju for the second time. Only the intervention of the Jaeger Striker Eureka saved the city from certain destruction at Mutavore's hands.

This stark demonstration of the wall's ineffectiveness in defending against the Kaiju threat triggered an overwhelmingly negative reaction from the public, with workers on the Alaskan wall even beginning to question the point of building it. Despite the wall's obvious failure, politicians such as L. Taylor continued to foolishly lend their support to the project, leading to mass riots in various cities on the Pacific Rim.

The wall was constructed to stretch around most of North and Central America as well as East and South Asia in a move to isolate the Kaiju from those living on the Pacific Rim. Known locations of the wall's construction were primarily in Los Angeles and Alaska, particularly in Anchorage, Sheldon Point, Sitka, and Nome.

Mutavore destroys part of the Anti-Kaiju Wall in Sydney, Australia

Raleigh, Tommy, and other workers of the Wall

Mutavore breaks through the wall 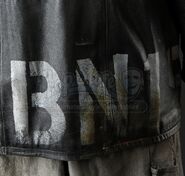 Concept art of common attire of a Wall worker.