Belobog is a simulated Kaiju used in training at the Jaeger Academy.[1]

Belobog's appearance is mixture of a crustacean and an insect; its broad shell protects everything from the head down. It walks on multiple short legs; it uses pincers as a means to attack its enemies during melee combat. Its deadliest weapon, however, is its tongue, which can pierce the visor of a Jaeger's Conn-Pod in one hit.[1]

During a simulated combat session in the Jaeger Academy, Yancy and Raleigh Becket's Jaeger is attacked by Belobog as a part of their training. The two grapple with the Kaiju in the simulated city, smashing it against a building. Yancy tears one of its mandibles from its face and punches it across the city into a wall.[1]

When the two appear to be winning, Yancy allows his mind to Drift; he thinks back on the night out he had with Jaeger Fly, Naomi Sokolov. His distraction angers his brother, who is interested in Sokolov as well, and allows Belobog to gain the upper hand in the fight. The Kaiju knocks them into a building where it tackles them. Opening its mouth, Belobog uses its tongue to pierce the Conn-Pod of the Jaeger, ending the simulation.[1] 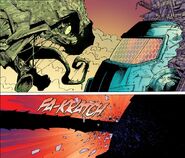 Belobog defeats the Beckets
Add a photo to this gallery