Fong and Tull[1],
Kaiju Remedies
"Bone Slum"[1] is a term typically used to reference an area in which shanty towns (or otherwise noted) are built around the remains of a Kaiju.

Following the aftermath of Jaeger and Kaiju combat, damage and contamination from the decomposing Kaiju body brought on from battles would leave the surrounding land uninhabitable for a time. As a result, the land is no longer considered hospitable or financially desirable.[2]

The bodies of Kaiju left behind are harvested by scavengers and black marketeers for profit until nothing except its bones remains. Though depreciated, individuals who choose to re-inhabit the land and rebuild in an environment that co-exists with the remains of the Kaiju.[2]

In the aftermath of Reckoner's attack on Hong Kong in 2016[3], property values in the polluted areas plummeted[4], resulting in a shantytown that attracted crime and Kaiju Cultists. Many buildings are constructed in or around Reckoner's skeleton, its skull would later house a temple for worship.

Hannibal Chau operates in the Bone Slums, in the back of a shop on the corner of Fong Road and Tull Street. A specific symbol (visible under blue light) is necessary to find it and gain entrance.

A city being reconstructed around a dead Kaiju. 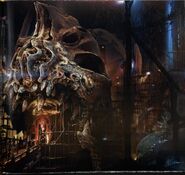