The Conn-Pod[1] is the cockpit and control center of each Jaeger. From here, Rangers are able to control their Jaeger's every movement.

Prior to the launch of the Jaegers, the Conn-Pods are detached and situated at the top of the Shatterdome nearest to the Drivesuit Room.[2] During the launch of a Jaeger, the Rangers board the detached head and are connected to the operating System. The Pod is then dropped down a shaft onto the body of the Jaeger, where it reconnects to the base of the body.[2] Conn-Pods are traditionally mounted on the shoulders of the Jaeger, furthering their loosely humanoid appearance. This carries over with most Jaegers, such as Gipsy Danger, Crimson Typhoon or Striker Eureka.[2]

However, there are exceptions: The Russian Jaeger, Cherno Alpha's Conn-Pod is located in the chest area, as the space on the shoulders is taken up by the machine's massive power plant.[2] Its Conn-Pod has no escape hatch or pods, the Russians operating on the belief of a win or lose scenario.[1] Each Jaeger's Conn-Pod is built with escape pods in the event that its pilots need to escape the Jaeger during an emergency.[2]

Conn-Pods are typically outfitted with escape hatches that Pilots can enter or exit through once the cockpit is attached to the Jaeger; in other cases, escape hatches are located on the shoulder or elsewhere.[2] Conn-Pods are the most vulnerable part of the Jaeger. As the Kaiju adapted to the nature of the Jaegers, they began to specifically target the Conn-Pods.[2] Some Jaegers, such as Striker Eureka and Coyote Tango, are equipped with entry and exit hatches on the roof of the Conn-Pod.

Digital heads up displays allow the pilots an immediate layout of their environment, while physical control panels affixed to the top of the Conn-Pod and between the pilots allow them access to weapons and the basic functions of the Jaeger. Exterior or landscape cameras are often in the face of the Conn-Pod where the Jaeger's "eyes" are represented. Crimson Typhoon's single eye in one example. Coolant and hull panels are examples of control panel-accessed functions.[2]

The interior of a Conn-Pod often reflects the primary design aesthetic of the Jaeger and its pilots' armor. This is particularly exemplified in the Conn-Pod for Crimson Typhoon and Cherno Alpha, both of which take on more eccentric looks in comparison to the simple or militaristic designs of Gipsy Danger or Striker Eureka.

Movement within the Conn-Pod is an complexly designed system placed directly under the feet of the pilots. Depending on the design of the Conn-Pod, the mechanics of the Conn-Pod below may be exposed to allow better movement, or hidden beneath a floor panel where only the movement of the pedals the pilots feet are buckled into is allowed immediate movement.[2]

Above the pilots are a rig that attaches to the arm and the spinal clamp of the Drivesuit, making it possible for the pilots to move in unison together in the Drift. The helmet of the Drivesuit is connected to the life support systems of the Conn-Pod and provide further oxygen where or when necessary.[2] 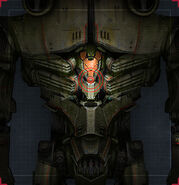 Yancy holding a holographic model of the Saltchuck

Striker Eureka's HUD after its damaged by Slattern

Digital symbol for the Chain Sword(s)

Gipsy Danger's hand controller after the left arm is lost.

Interior of the Conn-Pod set (photography by Travis Beacham)

The diagnostic board from Gipsy Danger's Conn-Pod (2020). 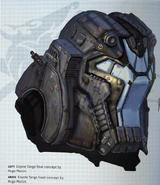 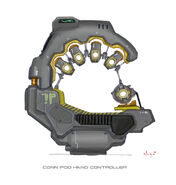 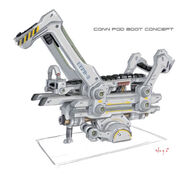 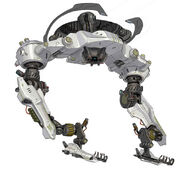 Gipsy Danger's original Conn-Pod after its been torn apart 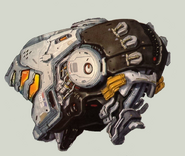