Conn-Pod/Uprising contains plot and/or ending details of Pacific Rim: Uprising and all its related media. Proceed at your own discretion.

"WARNING: UPRISING ALERT. Use Caution and watch out for the Uprising signals." Conn-Pod/Uprising, contains Pacific Rim: Uprising plot and/or ending details that may contradict or conflict with the established Pacific Rim mythology.

Conn-Pods are the cockpit of the Jaegers. The central control hub of the mech, Rangers are able to control the Jaeger's every movement when connected in the Drift.[1]

Conn-Pods in later generation Jaeger contain no major moving parts that work from the previous iterations of Mark-1 through Mark-5 Jaegers. Conn-Pods appear to be stationary, locked to the body of the Jaeger unless forcibly removed or severed.[1]

The interior of the Conn-Pod is expanded, and dominated primarily with a holographic HUD, which acts as a representation of weapons and the overall operations of the Jaeger. Rangers are no longer locked to the Conn-Pod itself, but can move freely within the space of the cockpit with only minor interface to the Drivesuit required.[1]

Unique only to Bracer Phoenix, which uses a three-pilot cockpit design similar to Crimson Typhoon, a secondary Conn-Pod, the Gunner Pod, is used to operate the Centrifugal Vortex Cannons located on the Jaeger's chest. The Gunner Pod is situated in between the two cannons, and can rotate to face behind Guardian Bravo.[1]

Holograms on the base of the Gipsy Avenger Conn-Pod 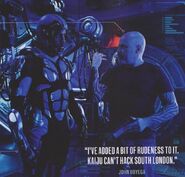 Retrieved from "https://pacificrim.fandom.com/wiki/Conn-Pod/Uprising?oldid=88603"
Community content is available under CC-BY-SA unless otherwise noted.