Wei Tang Brothers
Hannibal Chau
Hong Kong is a special administrative region of China and the location of at least ten major Kaiju attacks over the course of the Kaiju War.[2][1][3]

In 2015, the Pan Pacific Defense Corps constructed a Shatterdome in Hong Kong where the Jaegers Horizon Brave, Shaolin Rogue and Crimson Typhoon were stationed to defend the city against Kaiju attacks.

In 2016, the Kaiju Reckoner attacked the city and was presumably killed by a Jaeger. In the wake of its death, the Kaiju's corpse contaminated the environment around it.[2] By 2025, Reckoner's bones had become the location of a shantytown that harbored both black market dealers and Kaiju cultists who worshiped the beasts through a temple that they had built within the bones of the Kaiju's body.[2]

Like most countries on the Pacific Rim, China worked with the Pan Pacific Defense Corps to become better prepared for Kaiju attacks. Anti-Kaiju shelters were set up beneath the streets of Hong Kong in conjunction with the Kaiju Alert System that warned civilians of incoming danger when a Kaiju was detected heading towards the city. Hong Kong's most prominent defenders were the Wei Tang Brothers, the three pilots of Crimson Typhoon.[2]

In 2025, Leatherback and Otachi emerged from the Breach with the intention of hunting down Newton Geiszler, who had established a mental connection with the Kaiju when he drifted with Mutavore's brain back at his lab several days before. Crimson Typhoon, Cherno Alpha, and Striker Eureka were immediately mobilized to defend the Miracle Mile. In the ensuing battle, Otachi easily destroyed Crimson Typhoon, while Leatherback destroyed Cherno Alpha and disabled Striker Eureka with an EMP blast.[1]

Gipsy Danger was deployed into the harbour as a last resort against the Kaiju and arrived just in time to save Striker Eureka from certain destruction at the hands of Leatherback. After a long fight that completely trashed the Hong Kong Port, Gipsy was able to kill Leatherback with its right-arm plasma cannon.

Pursuing Otachi into Hong Kong with an oil tanker in hand, Gipsy Danger engaged the Kaiju in a prolonged battle across the city. The fight eventually ended when Otachi carried them both up into the upper atmosphere, prompting Gipsy Danger to activate one of its chain swords and cut the Kaiju clean in half. Although this sent them both into freefall, Gipsy Danger was ultimately able to land safely in a stadium when its pilots loosened the Jaeger's shock absorbers and purged its nuclear reactor, significantly slowing its descent before it finally made contact with the ground.[1]

Following Otachi's death, its offspring was born and went on a rampage. The newborn Kaiju eventually died by accidentally strangling itself with its own umbilical cord, but not before devouring Hannibal Chau.[1]

Gipsy Danger faces off against Otachi in the streets of Hong Kong.

Charlie Day on the set of Pacific Rim 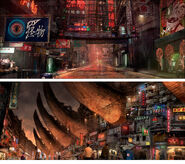 animatic of Otachi and Gipsy Danger