Manila
Hundun[3] is the second Kaiju to attack humanity.

Six months after Trespasser attacks San Francisco, Hundun emerges from the Breach. The Kaiju makes landfall in the Philippines; specifically at Taal, in the Batangas province, at night during a tropical storm. It crosses Taal lake, then crosses Laguna de Bay, approaches Metropolitan Manila and attacks Manila itself.

By the time officials know what is happening, Hundun is rampaging through the city, causing widespread death and destruction and terrorizing the inhabitants, before being finally killed by a tactical nuclear strike.[3][2] [4][5] However, though it is killed, its excrement severely contaminates the environment of the city.[2]

Because the attack occurred prior to the formation of the Pan Pacific Defense Corps, Hundun does not have a category. 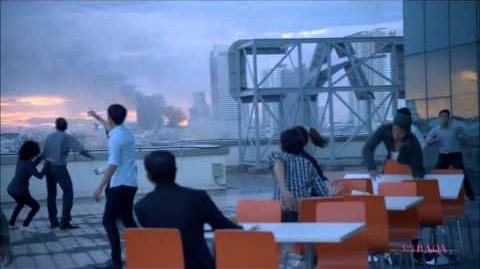 Retrieved from "https://pacificrim.fandom.com/wiki/Hundun?oldid=91404"
Community content is available under CC-BY-SA unless otherwise noted.