"There are things you can't fight. Acts of God. You see a hurricane coming, you get out of the way. But when you're in a Jaeger, suddenly, you can fight the hurricane. You can win."
—Raleigh Becket[1]

Jaegers ([ˈjɛːɡɐ], Jäger, Hunter) are a special type of mobile weapon created by the Jaeger Program. The Jaegers were the most effective first and last line of defense against the Kaiju during the Kaiju War.

The Jaeger Program was first developed by Dr. Lars Gottlieb[2] shortly after Jasper Schoenfeld proposed the idea for the Jaeger at the 2014 conference in Seoul, South Korea following the fourth Kaiju attack on Sydney, Australia in September.

Prior to the conference, Schoenfeld looked for a more efficient way of killing the monsters without the use of nuclear weapons.[3] Upon witnessing his son playing with a toy robot and toy monster in his room, he came across the inspiration for giant humanoid mechs which could stand up to the Kaiju without resorting to nuclear weapons. Dr. Jasper Schoenfeld's idea was approved by the United Nations.

With the help of Caitlin Lightcap, an expert in brain-machine interface, Schoenfeld was given funding to begin construction on the first prototype Jaeger in a warehouse in Pittsburgh.[4] However, the cost of production made the Pan Pacific Defense Corps hesitant to continue funding Schoenfield and Lightcap. The assistance of Stacker Pentecost in testing the Pons System's effectiveness, however, convinced the Defense Corps. to give the scientists a larger backing than before.[4]

Though the construction of the first Mark-1 prototype Jaeger Brawler Yukon was successful, drawbacks connected to the neural interface overloading the mind of its test pilot brought into question the Jaeger Program's feasibility.[4] Lightcap's risk to bridge with the mind of the next test pilot, Sergio D'onofrio, created a connection between the two based on technology developed by DARPA, which allowed them to simultaneously pilot the Jaeger successfully.[4] Pleased with the results, the Defense Corps green-lit the production of more Mark-1 Jaegers that were later deployed across the Pacific in specific countries to intercept the Kaiju attacks.[4]

The “Mark" label assigned to each Jaeger refers to the launch schedule. The production program was divided into five annual roll-outs that began in 2015 and ended in 2019. Six Mark-1’s were deployed in 2015, followed by the Mark-2’s in 2016 and the Mark-3's in 2017. Mark-4 and Mark-5 Jaegers were the last produced in 2018 and 2019.[5] Jaegers have no standardized design template; body-types vary widely within each “mark." This level of diversity among the Jaeger designs and weaponry was a tactical response to the high variability in Kaiju shapes.

All Mark-1 through Mark-3 Jaegers utilized nuclear reactors, which put their pilots at substantial risk of developing cancer. Gipsy Danger and Cherno Alpha were the last active nuclear-powered Jaegers to play a part in the continued defense of Hong Kong and mission to assault the Breach. Mark-4 and Mark-5 Jaegers, however, used digital technology, minimizing the dangers to the pilots inside the Conn-Pod.

Unfortunately, the development of the Jaeger program was not cheap. The cost of building the Mark-5 Jaeger Striker Eureka, was a reported to be over a hundred billion dollars, more than ten times the cost of a nuclear aircraft carrier.[citation needed]

As an alternative to nuclear weaponry, Jaegers were designed to generate as much kinetic energy as tactical ordnance.[6] They were built to match the estimated scale of Kaiju, and minimize damage created by conventional weapons. However, given the toxic nature of the Kaiju, Jaegers were required to rely on hand-to-hand combat and close-quarters weapons such as swords or other blade-type weapons.[6] In conjunction with close-quarters combat, heat-based weapons such as the Plasmacaster minimize the spread of Kaiju Blue, as they can wound and cauterize the creatures at the same time.

In order to prevent damage to major cities, Jaegers are often deployed from their respective Shatterdomes into the neighboring harbors or oceans of cities that hug the coastlines of the Pacific Rim. Though they fight at a disadvantage in the water, a Jaeger's priority is to prevent Kaiju from crossing the Miracle Mile, the last-ditch perimeter within a few miles offshore. Should a Kaiju bypass a Jaeger and cross the ten-mile line, it becomes difficult to stop a Kaiju from reaching the land.

As such, unavoidable combat that occurs within populated cities creates equal, if not more damage to the surrounding environment. Combat with a Kaiju is estimated to take two hours or more.[6] Whether this is indicative of the pilot's skills or strength is undetermined.

Deployed and constructed in Shatterdomes, Jaegers are handled and maintained by dedicated teams assigned to each mech. The LOCCENT Mission Control and Controller appointed to LOCCENT oversee various operations and deployment.

Jaegers are controlled by two, or rarely, three, pilots stationed inside the Conn-Pod. Pilots are equipped in a type of specialized armor that allows them to simultaneously interface with the machine. The pilots' very minds are connected in a neural bridge that allows them to control the machine's every movement.

2019 marked the height of success for the Jaeger Program, with thirty active Jaegers. Of the more than thirty Jaegers built, only four remained in active service as of 2025. Six Jaegers were lost in 2024 alone when the Kaiju attacked an unprecedented thirteen times[7].

The Jaeger Program was eventually phased out and resources were instead redirected towards building the Anti-Kaiju Wall under the Wall of Life Program. Although the latter proved useless when Mutavore effortlessly broke through the Sydney Wall within an hour of assaulting it, the United Nations still refused to support the continuation of the Jaeger Program. Instead, they consented only to allow Marshal Stacker Pentecost a mere eight months worth of funding for continued operations out of Hong Kong, using four of the program's recently decommissioned Jaegers as he saw fit.

When Hong Kong came under attack by Leatherback and Otachi, two of the remaining Jaegers (Crimson Typhoon and Cherno Alpha) were destroyed in battle. Striker Eureka would have met the same fate if not for Gipsy Danger's intervention, which fortuitously reversed the tide of battle. The two surviving Jaegers were later deployed (along with a high-yield thermonuclear device) to the Marianas Trench in an attempt to seal off the Breach and prevent more Kaiju from emerging. Unfortunately, they were intercepted by Slattern, Raiju, and Scunner.

While Striker Eureka fought Slattern, Gipsy Danger managed to kill Raiju. When Slattern sustained too much damage, it called for aid, leading Scunner to the battle. Striker Eureka detonated the thermonuclear device, destroying both the Jaeger and pilots Stacker Pentecost and Chuck Hansen, in order to buy Gipsy Danger sufficient time to enter the Breach as the Mark III Jaeger is nuclear-powered and is suitable to be used as an improvised nuclear bomb. The blast killed Scunner and severely injured Slattern. Gipsy Danger managed to finish off Slattern and the Precursors within the portal by detonating its nuclear reactor, thereby officially ending the ongoing threat from the Breach and the Kaiju War.

The following Mark classifications below are in accordance with the information provided by the film or Travis Beacham[8][9]. Jaegers classified as "Unknown" have yet to be given Mark status.

Following the Navy traditions[10][11], Jaegers are referred to in masculine or feminine terms, likely as a means of personalizing. Gipsy Danger is predominantly refereed throughout Pacific Rim as "she"[1] (however, in Man, Machines & Monsters Gipsy Danger is referred to as a "he"[12]) Gendered or neutral pronouns used for other Jaegers vary depending on the speaker.

Romeo Blue on the cover of Rolling Stone Magazine

Tacit Ronin aids in the clean up effort in Japan

Striker about to fire its missiles

Crimson Typhoon preparing to use the "Thundercloud formation"

Gipsy Danger coming out of water

Cherno Alpha deployed into the sea, ready to defend a city and fight off the Kaiju.

Early concept of a damaged Jaeger and Conn-Pod interior 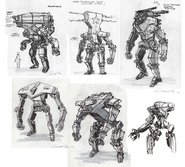 Size comparison of the cameo Jaegers.