Jaeger/Uprising contains plot and/or ending details of Pacific Rim: The Black and all its related media. Proceed at your own discretion.

"WARNING: UPRISING ALERT. Use Caution and watch out for the Uprising signals." Jaeger/Uprising, contains Pacific Rim Uprising plot and/or ending details that may contradict (or {conflict) with the established Pacific Rim mythology.

"We Stand Tall For All Humanity."
—PPDC Tagline

Jaegers ([ˈjɛːɡɐ], Jäger, Hunter) are next generation mobile weapons. Originally pioneered by the Pan Pacific Defense Corps' Jaeger Program, the Jaegers were the most effective first and last line of defense against the Kaiju during the Kaiju War from 2014 to 2025. In 2035, the successors of the original Jaeger Program have been utilized by the reformed Pan Pacific Defense Corps. and utilized as a means of world-wide defense in the absence of the Kaiju.

As a result, Jaegers were no longer built to protect or represent any given country.[2][3] Fully militarized, Jaegers began acting as border patrol for cities around the Pacific Rim[4], enforcing the law of the PPDC where violations are made.[5]

The Mark-6 Jaegers were built during the ten-year period following the Kaiju War. While some believed the Kaiju were no longer a threat, others chose to be cautious and were motivated to resume construction of the Jaegers. The Mark-6 Jaegers reportedly represented "the pinnacle of human invention". Mark-6 Jaeger's used "state-of-the-art" hologram technology, and stand at 250' tall.[6]

Mark-6 Jaegers were designed with sleeker frames and use high octane burst replusors. Speed and velocity were increased, and the armor plating of the Jaegers utilized newer, lightweight reinforced steel armor material. The fighting strength of Mark-6 Jaegers utilize over 30,000 pounds of force[6], allowing them to move in ways that were not possible for their predecessors.

Additional weaponry used by Mark-6 Jaegers included blades designed with plasma, and the gravity sling, a weapon that "turns everything into a weapon". In the particular case of Gipsy Avenger, a Mark-6 Jaeger built in honor of the memory of Gipsy Danger, it utilizes two nuclear vortex turbines that generates enough energy to sustain the city of Chicago for a year.[6]

The aftermath of Jeager battles left parts that were not salvaged by the Pan Pacific Defense Corp scattered across the Pacific Rim. As a result, Jaeger parts were sold on the black market to civilians.[7][8]

Aware of the threat the Kaiju posed during the Kaiju War, civilians like Kai and Amara Namani, began constructing their own personalized Jaegers to fight back and protect themselves.[7][note 1] Outside of personal defense, Rogue Jaegers are utilized for sport such as illegal races[9] or personal security for Black Market dealers.[4]

Despite the relative effectiveness of the PPDC, military contractor Shao Industries, headed by technologist Liwen Shao, moved to push the approval of Drone Jaegers, unmanned Jaegers that could potentially replace the use of pilot-controlled Jaegers utilized by the PPDC. With the aid of Newton Geiszler, a former member of the PPDC gone into the private sector for personal gain, Shao was able to construct several drones for practical use.[5]

During a PPDC council meeting in Sydney, Australia that would decide whether or not Shao Industries' drones would be approved, the PPDC were attacked by a Rogue Jaeger, Obsidian Fury. The Rogue Jaeger managed to cause enough damage during the council session, that, following the death of General-Secretary Mako Mori, Shao received the approval to move forward with her drones.[5]

Investigation into the whereabouts of Obsidian Fury led the PPDC to Siberia, Russia. Jake Pentecost and Nate Lambert discover the Jaeger residing in a Jaeger Production Facility, which it later destroys in an attempt to mask who it operated for. Gipsy Avenger was able to destroy the Jaeger, pulling its power core from its chest.

Removing the faceplate of the Rogue Jaeger discovered a secondary Kaiju brain and tech created by Shao Industries. Liwen Shao was accused of instigating the attack on the PPDC in order to achieve her goals. They later discover Newton was responsible for the attack and tampered with the rest of her drones.

The PPDC sent the Jaegers, Guardian Bravo, Bracer Phoenix, Saber Athena and Gipsy Avenger out against the Kaiju that emerge from the Breaches created by Shao's drones. While Shao was able to disable the rest of her drones by hacking their hardware and creating a feedback loop that destroyed their Kaiju brains, Newton further instigates circumstances and forces the Kaiju (Raijin, Hakuja, and Shrikethorn) to merge into a larger and stronger Kaiju.

After learning the Precursors intended on using the Kaiju blood to trigger a extinction-level event using the Ring of Fire to colonize the Earth, the Jaegers worked together to prevent the Kaiju from reaching Mount Fuji. Though most of the defending Jaegers fell, the Mark-6 Jaeger Gipsy Avenger and the Rogue Jaeger Scrapper managed to kill the Mega-Kaiju with a kamikaze attack from the outer atmosphere, resulting in the destruction of both Jaegers. Following the death of the Mega-Kaiju, the PPDC prepared their organization for a potential invasion of Anteverse.

The following Mark classifications below are in accordance to information provided by the film or other external media sources.

One of the design tenants put forth by Guillermo del Toro in Pacific Rim was the emphasis of weight and scale of the Jaegers. del Toro, who was involved in every aspect of the Jeagers, placed emphasis on designing the them with a level of realism that would show how they would impact the surrounding environment.[13] Industrial Light and Magic's Hal Hickel and Alex Jaeger relayed that conveying the speed of the 250 foot tall machines with various moving parts in their design required camera trickery that slowed or speed up certain action sequences, but never betrayed the weight and scale that del Toro asked of the effects team.[14]

During the production of Pacific Rim: Uprising, on-set supervisor Dave Merritt explained that the aim of the sequel was make convey a level of "speed and momentum and slickness,” for the sequel on the basis that massive technological advances were made during the ten year gap in the film's universe.[15]

John Boyega conveyed that he disliked how the Jaegers moved in the original film[note 3], and hired Liang Tang, a fight coordinator for Rogue One: A Star Wars Story, and Star Wars Episode VII: The Force Awakens, to give the Jaegers a stronger “martial arts feel”.[15] Production Designer Stefan Dechant stated that director Steven S. DeKnight and producer Cale Boyter wanted action sequences between the Jaegers to resemble the choreography used in Doug Liman's The Bourne Identity, placing emphasis on the speed of the Jaegers. “There'll just be a much faster movement in there. There's that level of speed and momentum and that slickness,” says Dechant.[15]

When discussing the special weapons used by the Jaegers, DeKnight and producer Boyter cited video games as a major inspiration. DeKnight and Boyega compared the weapons and special attacks of the Jaegers in Uprising to finishing moves featured in fighting games.[note 4][16][17]

A scale chart for the Jaegers seen in Pacific Rim: Uprising
Add a photo to this gallery 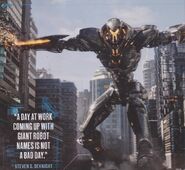 Gipsy Avenger stands against the sun.

Guardian Bravo squares off against the Kaiju 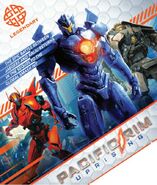 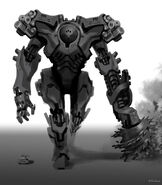 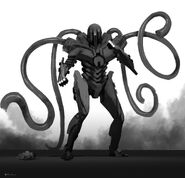 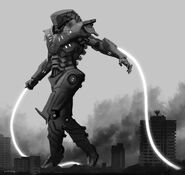 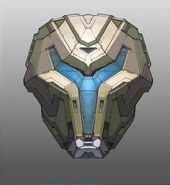 Retrieved from "https://pacificrim.fandom.com/wiki/Jaeger/Uprising?oldid=93094"
Community content is available under CC-BY-SA unless otherwise noted.