The Jaeger Academy is an institution created by the Pan Pacific Defense Corps to train new pilots for their respective Jaegers in the war against the Kaiju.[2] The training program at the Jaeger Academy takes a total of twenty four weeks, divided into three eight-week trimesters.[3]

The Academy was set up some time after the Kaiju Karloff was defeated by Brawler Yukon. This event proved a huge success for PPDC and demonstrated the viability of the Jaeger Program. The facility was constructed on Kodiak Island, Alaska.[2]

After his forced retirement from piloting a Jaeger, Stacker Pentecost decided to become a teacher at the academy to teach future rangers and pilots how to drive the Jaegers.[2][4]

The Jaeger Academy serves as both a recruitment and training center. The academy works to prepare future Rangers and candidates for service in the Pan Pacific Defense Corps, and the physical and mental demands it requires.[2][4]

Students learn about the technical aspects of piloting a Jaeger and are constantly tested and pushed to their physical and mental limits; how much a student can remember, learn and maintain within a short period of time determines whether or not they’ll be able to make the cut and become a Ranger.[2]

Their ability to trust the person next to them, relative or otherwise noted, is also incumbent on determining their status as Jaeger pilots. Training exercises which normally provide education in a service environment are presented in battle simulations or one-one-one combat sessions in the Kwoon Combat Room.[2][4]

Very few who join the academy ever make it past the first cut. Those who train Jaeger pilot hopefuls, train them with the intention of breaking their spirit; maintaining relentless tactics to exemplify the mercilessness of the Kaiju the trainees will hope to face in battle as pilots.[2][4] Anyone who scrubs out at any point after the first cut still qualifies for a PPDC officer position.[3] 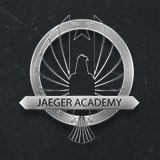 Retrieved from "https://pacificrim.fandom.com/wiki/Jaeger_Academy?oldid=76456"
Community content is available under CC-BY-SA unless otherwise noted.