"That puts the epicenter of the seven point one earthquake right in the heart of the San Francisco Bay. We've also been getting strange reports of something moving under the Golden Gate Bridge."
—Unidentified news reporter.

K-DAY is the given name for the first Kaiju attack on humanity. The incident took place on August 10, 2013[2] through August 15, 2013 in the cities of San Francisco, Sacramento, and Oakland. K-DAY marked the beginning of the Kaiju War.[3]

Prior to the creature's appearance, an earthquake measuring 7.1 on the Richter Scale was recorded. The epicenter of the quake was in the middle of the San Francisco Bay. It may be logically speculated that this quake was in fact the footfalls of the Kaiju as it walked on the relatively shallow floor of the bay after swimming in from deeper water.

The creature emerged out of the waters of San Francisco Bay and destroyed the Golden Gate Bridge, killing hundreds of motorists as their vehicles plunged into the bay amid falling steel and concrete from the destroyed bridge.[1][3]

News reports of the quake were quickly followed by “strange reports of something moving under the Golden Gate Bridge”. Video footage of the Kaiju attacking the bridge was broadcast by news organizations all over the world. Reporters estimated the beast to be 300 feet tall. Successive news reports showed the devastation it inflicted on San Francisco and the surrounding cities, and the futile attempts of the combined forces of the US and United Kingdom military's ground forces and airstrikes to kill it.[5]

The creature then went on a 35 mile rampage along the American Pacific coast, devastating the cities of Sacramento and Oakland over the next six days. The United States and British militaries responded to the giant creature, fighting it over the course of the six days. With troops, tanks, heavy artillery and jets attempting to kill the creature, they were unable to succeed in stopping it.

On August 15th, the military finally resorted to using tactical nuclear missiles to kill the creature, in which they succeeded. It took three such missiles to bring the beast down, and the nuclear fallout and Kaiju blood left large swaths of the Bay area uninhabitable for centuries.[1][6][7] The San Francisco Bay Area area was later named the San Francisco Exclusion Zone, or SFEZ.

Humanity was stunned by the devastating attack. The people of the devastated cities "mourned their dead, memorialized the event and moved on."

The creature's attack marked the beginning of incessant attacks by Kaiju against large areas of Human population centers. K-DAY was the start of a war that would last for another twelve years.

The creature was later designated "Trespasser" by the Pan Pacific Defense Corps after the organization was formed. Later, the Jaeger Program was founded to create a weapon strong enough to combat the Kaiju.[3]

The end of K-Day, when Trespasser is killed by a nuke. 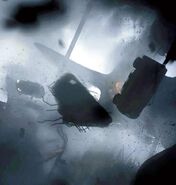