Pacific Rim Wiki
Register
Don't have an account?
Sign In
Advertisement
in: Pages which use a template in place of a magic word, Uprising Canon, Pacific Rim Uprising,
and 5 more

"WARNING: UPRISING ALERT. Use Caution and watch out for the Uprising signals." Kaiju/Uprising, contains Pacific Rim Uprising plot and/or ending details that may contradict (or {conflict) with the established Pacific Rim mythology.

The Kaiju were created by the Precursors for the express purposes of global colonization. In August 2013, the Precursors created portal on the floor of the Pacific Rim, and declared war on the inhabitants of the Earth when the first Kaiju attacked the city of San Francisco, leaving it and neighboring cities in shambles following a major battle between the United States Army and Royal Air Force that ended with its death several days later using nuclear ordnance.[1]

In the months proceeding the attack in 2013, the Kaiju continued to be ferried through the Breach and sent to attack various cities on the Pacific Rim. The Precursors' war on humanity was answered in 2014 with creation of the Pan Pacific Defense Corps, and the first Jaeger, Brawler Yukon.[1]

As Kaiju continued to attack the human populace and their major cities for the next twelve years, the PPDC continued to manufacture Jaegers in response to combat them.[1] However, the Precursors' true intention with the Kaiju was to attack Mount Fuji, a inactive volcano near Tokyo, Japan.[2]

For a time, the Kaiju appeared to be losing ground in battle when the Precursors began to develop smarter iterations of their weapons. Following the emergence of Knifehead in 2020, the next five years of the war saw the near-destruction of the Jaeger Program. The seeming culmination of the Kaiju's efforts to destroy humanity took place, not in Tokyo, but Hong Kong City.[1]

The Precursors were given a glimpse into the PPDC's plans to destroy their connection to the Earth when a scientist named Newton Geiszler attempted to Drift with the secondary brain of Mutavore, a Category IV Kaiju killed by Striker Eureka.[1]

Realizing that they intended to destroy the Breach, Category IV Kaiju Otachi and Leatherback were sent out to destroy the surviving Jaegers at the PPDC's disposal. In the attack, only two were destroyed, Mark-1 Jaeger, Cherno Alpha and Mark-4 Jaeger Crimson Typhoon. Despite the deaths of Otachi and Leatherback, their intention to weaken the PPDC was successful. In the culminating battle later named the "Battle of the Breach", the first recorded Category V Kaiju, Slattern was sent out in a last-ditch effort to blockade the Jaegers Gipsy Danger and Striker Eureka.[1]

Accompanied by Category IV Kaiju, Raiju and Scunner, Slattern was ultimately unsuccessful in its mission. and its body was used as a means to enter the Breach when it was killed by pilots Mako Mori and Raleigh Becket. Gipsy Danger’s nuclear reactor was used to destroy the Breach and the production facility the Precursors used to create the Kaiju that were able weaken the defenses of the Pan Pacific Defense Corps.[1]

In the ten years following the end of the Kaiju Wars, a business-woman and technologist named Liwen Shao, began to formulate technology that would allow for the manufacture and use of unmanned Jaegers over pilot-controlled Jaegers employed by the restructured and militarized Pan Pacific Defense Corps.[2]

She was aided by Newton Geiszler, who'd fallen under the influence of the surviving secondary brain of the Baby Kaiju. Using the technology from Liwen's company, Shao Industries, he began construction of the very first Kaiju-Jaeger hybrid: Obsidian Fury, a Jaeger Drone controlled by the secondary brain of a Kaiju. With the success of Obsidian Fury's construction, Newton began interweaving cloned Kaiju DNA into Liwen's Jaeger Drones as their production began.[2]

In order to ensure the implementation of the hybrids, Obsidian Fury was ordered to attack a major PPDC council meeting in Sydney, Australia. Despite the efforts of Mark-6 Jaeger, Gipsy Avenger, the hybrid was able to cause enough damage to fast-track an approval to the production of Liwen's drones. Obsidian Fury returned to Siberia, Russia, where it was built and awaited further order.[2]

An investigation into Obsidian Fury's whereabouts reveal its location and the abandoned Jaeger Production Facility where it was built. Obsidian Fury attempted to destroy the facility in order to mask its origins, but the discovery of its Shao Industries technology fused to the secondary brain provided the answers necessary for the PPDC.[2]

When the hybrids are activated, their organic nature was revealed, and the army of drones began an assault on the PPDC. Situating themselves across the Pacific Rim, the hybrids began using their power cores to create several new Breaches in order to allow the Precursors to continue their colonization efforts. Shao, who was led to believe that drones were designed for single-pilot operation, could deactivate the drones without complication. But the discovery of their organic nature make the endeavor much more difficult.[2]

Return of the Kaiju

While the PPDC were able to stop the hybrid drones, the creation of multiple breaches allowed three Kaiju into the city of MegaTokyo: Category IV Kaiju Shrikethorn and Hakuja, and Category V Kaiju Raijin. The surviving Jaegers, Saber Athena, Bracer Phoenix, Guardian Bravo, and Gipsy Avenger, enter the city to kill the Kaiju.

The ensuing battle motivated Newton, who remained under the influence of the Precursors, to send out the smaller hybrid drones that forced the three Kaiju to combine to form a "Mega-Kaiju". The combined Kaiju was able to overpower the Jaegers, save Gipsy Avenger, and began to complete the mission of the other Kaiju before it: reach Mount Fuji and trigger an extinction level event using the Ring of Fire with their blood.[2]

Upon learning the Kaiju's plan to kill itself on Mount Fuji, the PPDC used its surviving Jaeger, Gipsy Avenger, and fashioned a rocket to one of its hands. With the help of the Rogue Jaeger, Scrapper, Gipsy Avenger is able to launch a kamikaze attack on the Mega-Kaiju by flying into the atmosphere and then sending the Jaeger on a collision course with the Kaiju. The Mega-Kaiju is killed by the attack moments before it can complete its mission. With the destruction of the Mega-Kaiju, the consequences of the Kaiju's resurgence spurred the PPDC to plan an invasion of the Anteverse, implying that they had created the necessary formula to make their own Breaches from Newton's works.[2]

As aquatic creatures, the Kaiju created by the Precursors are able to traverse underwater environments in addition to surface environments with little difficulty. Following enormous loss from Kaiju Wars, the Precursors had developed better, greatly improved generations of Kaiju which powers and features more advanced than their predecessors. For instance, Raijin, Category V Kaiju, designed with ability to absorb kinetic energy and repurpose it as a weapon.

The hybrids, man-made creations using cloned Kaiju DNA and Jaeger Drones as a primary basis for their construction, use elements of technology in their biology, connected to their power cores, to create Breaches independently from the Precursors.

Their unique nature allows them to use weaponry otherwise unavailable to Kaiju created by the Precursors. In addition to technological elements, Kaiju are able to regenerate grievous injuries and merge together to create larger Kaiju with the help of hybrid Kaiju.[2]

Kaiju are naturally hostile and aggressive creatures, designed with the intent to be used like living weapons. Like their predecessors, the Kaiju that reemerge on Earth work as a coordinated force, either fighting in groups or swarms that can overwhelm an individual or a number of Jaegers.[2]

The biology of Kaiju-Jaeger hybrids allow them to interface with naturally created Kaiju, and use their own defenses to create new abilities or protection when the two Kaiju types become fused to create new forms.[2]

The design of the Kaiju in Pacific Rim: Uprising was the chief responsibility of storyboard artist Doug Lefler. According to Lefler, the three principal Kaiju designs were based on the names provided to them at the time. Lefler's design process was aided by Production Designer Stefan Dechant.[8]

Producer Cale Boyter, who also assisted in guiding the design of the Kaiju, stated that the design of the Kaiju was more difficult than that of the Jaeger designs for the film. The three Kaiju, Raijin, Shrikethorn, and Hakuja were designed with the intention of looking distinct enough that the sum of their parts were identifiable in the "Mega-Kaiju" design that was meant to "pay homage" to fusion themes often used in Tokusatsu franchises.[8]

The bulk of the design for the Mega-Kaiju was the chief responsibility of Weta Workshop, while Double Negative Studios, in association with Legendary Pictures, completed and refined the character model. According to Dechant, the Mega-Kaiju's design was inspired by his desire to own an electric car.[note 1][8] 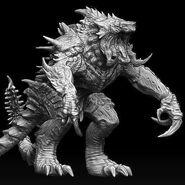 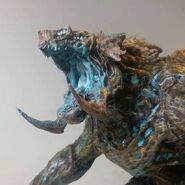