Pacific Rim: Tales From The Drift

Pacific Rim: Tales From The Drift

Pacific Rim: Tales From Year Zero
Pacific Rim: Tales from the Drift is a four-issue comic book miniseries presented by Guillermo del Toro and published by Legendary Comics.[4][5] Tale From The Drift follows the story of Duc and Kaori Jessop, a husband and wife Jaeger team, chronicling their first meeting and the final days of Tacit Ronin's before its destruction. Tales From The Drift was originally promoted as an ongoing series[4], but was later reduced to four issues released from November 2015 to May 2016. The series was written by Travis Beacham and Joshua Hale Fialkov, and features art by Marcos Marz, with variant artwork by Whilce Portacio, Pat Lee, Francis Manapul, and Livio Ramondelli.[1]

"Guillermo del Toro promised more adventures from the world of Pacific Rim - and he has delivered. Legendary is taking fans back to the frontlines of a larger-than-life battleground with Pacific Rim: Tales from the Drift, the official new comic series presented by director Guillermo del Toro, featuring a story from Pacific Rim screenwriter Travis Beacham. A continuation of the bestselling graphic novel Pacific Rim: Tales from Year Zero, the new Pacific Rim comic series will feature Jaegers never before seen in combat, squaring off against all-new Kaiju creatures."
—Official Description[6]

June 26, 2014, director Guillermo del Toro announced that Legendary Pictures would be working with him to produce an ongoing comic book series and an animated series that would work as an follow up to then April 2017 sequel to Pacific Rim.[5]

In an interview with the Wall Street Journal, del Toro explained that because of the success of Pacific Rim: Tales From Year Zero, they would continue to tell stories using the comic book format. The comics and the animated series would be produced and run almost in the same time, that when the sequel was released in 2017, the comic book title will have run for roughly three years, while the animated series will have aired for two.[4][note 1]

Legendary held a contest for the upcoming mini-series. Participants would have the chance to win a page of original artwork from Tales From The Drift if they entered at the official contest website, PacificRimComicArt.com.[6]

Pacific Rim: Tales of the Drift was a four issue miniseries that began release November 2015. The first three issues released from November 2015 to January 2016. According to its press release, the fourth issue of Tales From The Drift, was originally scheduled for a February 2016 release.[7] The issue was delayed by four months and later released May 4, and May 11, 2016 in retail stores and ComiXology.[7] 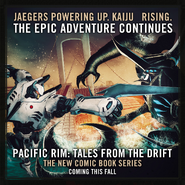 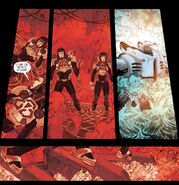 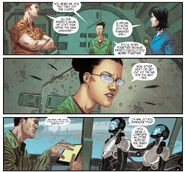