A fan community and encyclopedia for
Guillermo del Toro's film that anyone can edit!
Our database currently contains 825 articles and 5,525 images.

When legions of monstrous creatures known as Kaiju started rising from the sea, a war began that would take millions of lives and consume humanity’s resources for years on end. To combat the giant Kaiju, a special type of weapon was devised: massive robots, called Jaegers, which are controlled simultaneously by two pilots whose minds are locked in a neural bridge. But even the Jaegers are proving nearly defenseless in the face of the relentless Kaiju. On the verge of defeat, the forces defending mankind have no choice but to turn to two unlikely heroes - a washed up former pilot and an untested trainee - who are teamed to drive a legendary but seemingly obsolete Jaeger from the past. Together, they stand as mankind's last hope against the mounting apocalypse.

Scrapper is a Jaeger designed by a civilian named Kai. Classified as a "Rogue Jaeger", Scrapper is primarily piloted by Amara Namani.

Scrapper was designed and built by a man named Kai, a former businessman that lived in Seattle. In the aftermath of a Kaiju attack in Seattle that destroyed his business, he relocated to Santa Monica where construction on Scrapper presumably began.

Kai and his partner, Hannah, worked on the construction of Scrapper over a number of years, presumably using scrap parts from the Jaegers that were destroyed during the Kaiju War. Parts of the Santa Monica Pier wreckage are also visible, such as the bumper cars on Scrapper's feet. She presumably secured the parts left in the city ruins or sold on the black market, but the machine remained a work in progress. 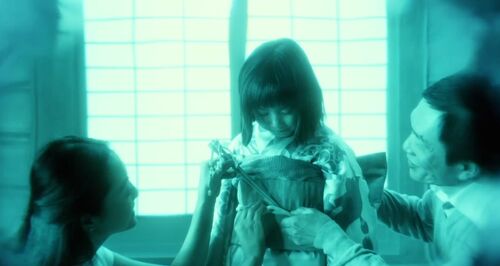 A young Mako with her parents, Sumako (L) and Masao Mori (R) in Pacific Rim

Retrieved from "https://pacificrim.fandom.com/wiki/Pacific_Rim_Wiki?oldid=89284"
Community content is available under CC-BY-SA unless otherwise noted.