Prior to becoming a full-time sculptor, Lee ran a self-made web design and programming company he named "Spiderzero Interavtive Media". Later, when he began uploading photography of his sculpture work, he began using "Spiderzero" as a his username and maintained it. Lee is a teacher and lecturer, working with up-and-coming artists who want to learn sculpture work, and educating artists in major companies like Industrial Light and Magic, Disney, Blizzard Entertainment, Naughty Dog and Electronic Artist.[1]

His work in the industry as a member of the art department began in 2013 with Pacific Rim. Since then, his other projects have included the 2014 films Maleficent, Noah and Edge of Tomorrow as concept artist and creature designer. That same year he collaborated with Guilermo del Toro again for the production of the FX series The Strain, where he worked on two episodes as a concept designer. In 2016 and 2017 he was a concept artist for the films Star Trek Beyond and Kong: Skull Island, another film produced by Legendary Pictures. He was also hired as a concept artist for the film Godzilla: King of the Monsters.[1]

Lee was one of several concept artists working on the deign of the Kaiju for Pacific Rim. He built various sculptures for the production, including Meathead, and various scultpures of Gipsy Danger, often locked in combat with another Kaiju. Of the Kaiju concept he made, one was named "Bat Ears Bradley", another was not used in the final film, its silhouette was later used for the promotional posters. His favor concept was named Himantura (also known as "Monster #1"[2]).[3][note 1][4]

A Model of Meathead 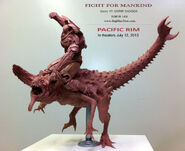 The back of a Kaiju sculpture

Profile view of a Kaiju sculpture