Sisters of the Kaiju

Sisters of the Kaiju contains plot and/or ending details of Pacific Rim: The Black and all its related media. Proceed at your own discretion.

"WARNING: UPRISING ALERT. Use Caution and watch out for the Uprising signals." Sisters of the Kaiju, contains Pacific Rim Uprising plot and/or ending details that may contradict (or {conflict) with the established Pacific Rim mythology.

The Sisters of the Kaiju are an enigmatic cultist group who worship the Kaiju.

One of the many Kaiju sects that popped up in the wake of their first landfall. A demented enclave of monster worshipers whom believe these titans to be dark angels enacting the vengeance of the gods upon the sins of mankind for their perceived transgression.

Many of whom seeing the Jeager Pilots the towering mechs ridden to meet them in mortal combat as blasphemers and false idols.

The Sisters are one of the many factions in Australia post-Operation Blackout.[1]

In Clayton City, the Sister travel with Rippers and observe the Travis siblings with the Boy on the rooftops. They are unnoticed by the party even after the Boy transforms into a Kaiju. After the destruction of the Copperhead Kaiju, one of the Sisters addresses her comrades that the "Kaiju Messiah" has appeared.[2] 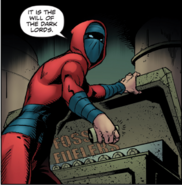 Sisters of the Kaiju members during their attempt to assassinate Hannibal Chau.

The Sisters with their temple using Yamarashi's skull in Hollywood.