"Hey, show some respect. When his brother died, he took the Jaeger back to shore on his own. I've known only one other pilot that's been able to do that."
—Herc Hansen to Chuck Hansen[1]

Solo Piloting[1][2] is an occurrence where a Ranger attempts to pilot a Jaeger on their own. The act itself is dangerous; Rangers run a high risk of dying in the process of piloting a Jaeger without a co-pilot.[3]

During the earliest stages of Dr. Caitlin Lightcap's Pons System, test pilots for the first Jaeger, Brawler Yukon, were unable to withstand the level of information delivered to their brains by the headset neurally.[2]

Although Dr. Lightcap would discover a means of sharing and stabilizing the burden of the neural load when she connected her mind to Sergio D' Onofrio's through the Drift[3], there are still rare instances during combat against a Kaiju when Rangers find themselves without a partner to assist them. The act itself is referred to as "solo piloting" or "piloting solo".[1] Solo piloting can cause brain damage to the pilot and possibly trigger seizures (the latter of which can kill them). However, the damage is not necessarily lasting. Tell-tale signs of a solo piloting include (but aren't limited to) blood in the eyes and bleeding from the nose.[2][1]

Solo piloting is not a unique ability or a description of a Ranger's mental strength. How long a Ranger can last piloting on their own is determined by how long they can withstand the neural load on their own. The longer a pilot fights on their own in a Jaeger, the more difficult it can become.[2]

Raleigh Becket and Stacker Pentecost were both able to pilot their respective Jaegers, Gipsy Danger and Coyote Tango, long enough on their own to kill Knifehead and Onibaba before hitting the limit their brains could withstand.[2][1] Five years after his battle with Knifehead, Raleigh was able to briefly pilot Gipsy Danger on his own for a second time during Operation Pitfall when Mako Mori's oxygen feed was damaged in battle and she had to eject to safety. 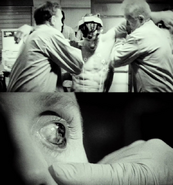 A test pilot after an attempt to pilot a Jaeger on his own. 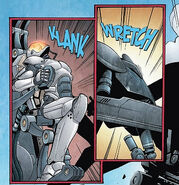 Adam Casey suffers a seizure while piloting Brawler Yukon on his own.