The Art and Making of Pacific Rim Uprising

"Explore the epic art of Pacific Rim Uprising, the highly anticipated follow-up to the 2013 monster hit. The Art and Making of Pacific Rim Uprising takes readers behind the scenes and back into the heart of the epic battle between Kaiju and Jaegers. Showcasing the brilliant concept art behind the film and immersing fans in the creation of a true sci-fi epic, this book will be the ultimate exploration of one of the most anticipated films of 2018."
—Press Release[1] 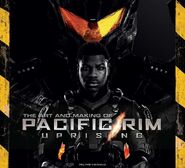 Retrieved from "https://pacificrim.fandom.com/wiki/The_Art_and_Making_of_Pacific_Rim_Uprising?oldid=93919"
Community content is available under CC-BY-SA unless otherwise noted.